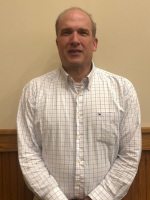 Director of Music and Worship
704-588-1290
Stephen@SteelCreekChurch.org

A native Carolinian, Stephen was born in Statesville where he graduated from North Iredell High School in 1989. After attending college at Gardner-Webb University, Stephen moved to Matthews, North Carolina, where he was called to the Minister of Music and Students at Mt. Harmony Baptist Church. It was at Mt. Harmony that Stephen met and married his wife of 25 years, Mandy (Amanda) Gadd and they had two sons, Noah and Elijah. Stephen went on to complete his undergraduate work at Wingate University and attended Seminary at Southeastern Baptist Theological Seminary in Wake Forest.

Stephen is excited to begin a new chapter in his life here at Steele Creek. Music and worship is his passion and he looks forward to watching the music ministry grow and expand as they focus on lifting up and exalting the name of Jesus Christ.