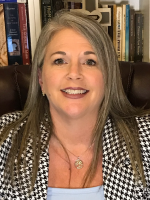 Dr. Keri focuses on the fulfillment of the Everyday Disciple vision for all children and youth. You’ll also see her serving in areas such as worship, preschool chapel, counseling, teaching, and holding others in prayer.

She is happily married and the proud mother of four children. Jonathan and Lauren have their own families and Kayla and Bri are finishing up their BS degrees next semester at Winthrop and UNCC. The oldest two are both in the medical field. Kayla is a sculptor and Bri is majoring in marketing. Keri and her husband Jonathan enjoy spending time with their two granddaughters Olivia and Payton and playing with their two labs Cooper and Cara.

Keri grew up in a military family and was privileged to experience diverse cultures as a child both within the military and in the cultures they were stationed within during their time abroad. She was captivated by God from a very young age and can remember writing poems to and about God as a child. Keri began ministry when her children were very young, serving first as the creative director in the children’s church where they attended, and a few years later entered full-time ministry as founder and director of an outreach ministry that targeted at-risk children called, The Least of These. Keri’s conviction was based upon the admonition of Christ in the gospel of Matthew that “whatsoever you do to the least of these, you have done it unto me.” For Keri ministry to the poor and at-risk is a way of loving and communicating her deep-felt gratitude to Christ for all he has given to her and to his people. Keri worked with this population for five years and eventually merged with another ministry before following the prompting of God to minister directly to the Body of Christ.

For over the last decade Keri has served in numerous ways while completing her studies. She has planned and facilitated retreats, developed formative practices for children and adults, worked as a spiritual director and facilitated spiritual formation workshops, and well as created and led numerous groups with varying models. Keri has earned her BS in Religion for The University of Mount Olive, her MA in Spiritual Formation from Spring Arbor University, her DMin in Formational Counseling from Ashland Theological Seminary and is entering the final year of her MA in Christian Clinical Counseling from Gordon Conwell Theological Seminary. This uniquely equips Keri to work with the Body of Christ to facilitate change and growth both spiritually and emotionally and to help mold the church into a healing community in the midst of a heartbroken world.