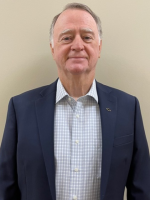 I’m a native North Carolinian, spent most of my childhood in Kannapolis. Our family moved to Salisbury in my sophomore year and I graduated high school there. Immediately after high school I joined the US Navy, and spent 3 years in California and Virginia. Upon discharge I moved to Charlotte to live with my Mom and her husband.

I met my wife-to-be while working together in an office in downtown Charlotte. I saw my need for some training so I entered CPCC and graduated 2 1/2 years later. After some marital difficulties, I felt the call into full-time Christian service so I enrolled at Gardner-Webb University and graduated in 1980. I was called to my first church in March, 1980. By this time we had 3 children, 2 girls and a boy. I went on to Southeastern Seminary and graduated from there in 1983.

My wife and I had been in the application process to be considered for appointment to serve as foreign missionaries. We were appointed to South Africa in 1983 and left for the greater Johannesburg area in January 1984. Four years later we were back in the States for furlough and my wife was going through chemotherapy for breast cancer. We decided to not return to South Africa but went back into the pastorate.

I was called to a church in Hendersonville NC and served there for 3 years. I returned to my first pastorate in Charlotte in 1991 and was there until 2000. My wife had died in 1998 from the effects of cancer and I re-married in 2000 and moved to Texas. I returned from Texas the following year. I started attending Pleasant Hill Presbyterian around 2004 and joined several years later.

When we merged with Steele Creek Presbyterian in 2019, I was asked to be the Parish Associate, which I eagerly accepted and have been working at ever since. While the past year has been limiting at best, I still enjoy the work and look forward to being able to serve more fully and effectively as we slowly return to normal.